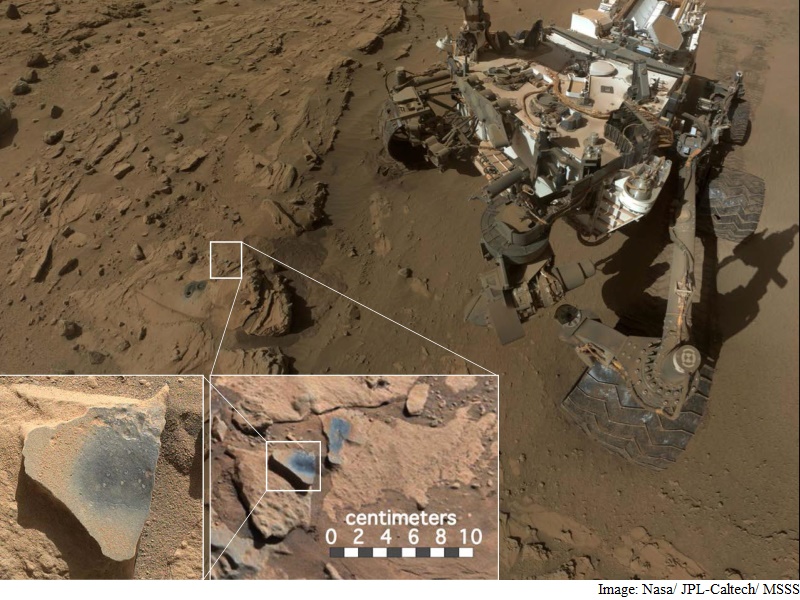 Nasa’s Curiosity rover has observed high levels of manganese oxides in Martian rocks which indicates that higher levels of atmospheric oxygen once existed on Red Planet.

The discovery tells that the Red Planet was once more Earth-like than previously believed.

The hint adds to other Curiosity findings – such as evidence of ancient lakes – revealing how Earth-like our neighbouring planet once was.

“The only ways on Earth that we know how to make these manganese materials involve atmospheric oxygen or microbes,” said Nina Lanza, planetary scientist at Los Alamos National Laboratory and lead author on the study.

“Now we’re seeing manganese-oxides on Mars and wondering how the heck these could have formed,” she added in a paper appared in the journal Geophysical Research Letters.

To reach this conclusion, Lanza used the Los Alamos-developed ChemCam instrument that sits atopCuriosity to “zap” rocks on Mars and analysed their chemical make-up.

In less than four years since landing on Mars, ChemCam has analysed roughly 1,500 rock and soil samples.

“Here on Earth, we had lots of water but no widespread deposits of manganese oxides until after the oxygen levels in our atmosphere rose due to photosynthesizing microbes,” the author noted.

One potential way that oxygen could have gotten into the Martian atmosphere is from the breakdown of water when Mars was losing its magnetic field.

“It’s thought that at this time in Mars’ history, water was much more abundant,” said Lanza.

The next step is for scientists to better understand the signatures of non-biogenic versus biogenic manganese, which is directly produced by microbes.

If it’s possible to distinguish between manganese oxides produced by life and those produced in a non-biological setting, that knowledge can be directly applied to Martian manganese observations to better understand their origin.